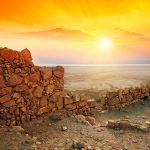 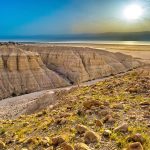 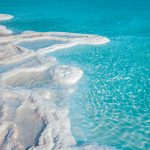 Dead Sea
Read More
Day 6
Shabbat Shalom! It is time to ascend Mt Masada (with the help of a cable car!) and learn about the Jewish revolt from Rome that ended with Jewish refugees holding up in this mountain-top fortress. Next we will go to the Dead Sea. Our first stop will be the Qumran caves, where the Dead Sea Scrolls were found. It remains the greatest archaeological discovery in modern history.

We will conclude our day with have some downtime, as we enjoy a float on the Dead Sea!
Overnight in Jerusalem
Masada
Read More
Masada

Nature Reserve
No place in Israel is as evocative of life in 1st-century Roman Judea as Masada, an isolated desert mesa where the last Jewish resistance to Roman rule was crushed in 73 CE after a dramatic, bloody siege.

Residential Palace / Fortress
Herod planned Masada as a palace stronghold and desert foxhole, and fortified it with walls, gates and towers. He wanted a place of refuge in case the Jews should rebel against him, or the Egyptian pharaoh Cleopatra (who coveted Judea) should try to have him killed.

Herod’s creature comforts include bathhouses and a swimming pool. The most elaborate bathhouse had a hot room with the floor suspended on low pillars. Hot air from a furnace was circulated under the floor and through clay pipes in the walls. To supply water in this arid setting, a sophisticated system channelled winter rainfall from nearby wadis into huge cisterns quarried low into the northwest of the mountain. Water was then carried by men and beasts of burden up winding paths to reservoirs on the summit. The lower cisterns alone are estimated to have a capacity of 38,000 cubic metres.

Romans Besieged the Fortress
Despite being Herod’s palace, Masada has become a symbol of resistance for the people of Israel. In AD 66, at the beginning of the Great Jewish Revolt against Rome, a group of Jewish extremists called Sicarii overran the Roman garrison stationed on Masada. By then, Herod had been dead for 70 years. The Roman governor Lucius Flavius Silva waited until Jerusalem had fallen before taking the Tenth Legion to Masada in 72-73. Laying siegeto the fortress, he established eight fortified camps linked by a ditch and wall around Masada, then built a ramp on top of a natural bedrock spur to reach the summit. Up the ramp the Romans rolled an iron-sheathed siege tower, with rapid-firing catapults and a huge battering ram to breach the fortress wall. When the Romans stormed the summit, they found the bodies of 960 occupants.

Restored Ruins
Today many of the buildings on Masada’s summit have been restored, including Herod’s bathhouses (a black line on the walls indicates where restoration began). Some have mosaic floors.

Remains of a synagogue used by the Sicarii and a church built by Byzantine monks in the 5th century have also been excavated. The monks lived in cells dispersed round the summit.

Silva’s siege works and ramp, including remains of the Roman wall and camps, can still be seen.

The Qumran Caves are famous as the hiding place of the Dead Sea Scrolls, a literary treasure trove hidden since shortly after the time of Christ.

A Bedouin goat or sheep-herder by the name of Mohammed Ahmed el-Hamed found the first scrolls in 1947, when he threw a rock into a cave in an attempt to drive out a missing animal. The sound of breaking pottery drew him into the cave, where he found seven clay jars containing scrolls that had been wrapped in linen for nearly 2000 years.

Eventually, fragments of about 850 scrolls were found in 11 of the hard-to-reach caves that pockmark the cliffs of the Qumran area. A 12th cave, its contents looted, was found in 2017.

The ancient manuscripts were in various states of completeness. Only a handful were intact, the largest more than 8 metres long. Most were written in Hebrew, some in Aramaic and a few in Greek. Most were on parchment, with a few on papyrus. They had been preserved by the hot, dry desert climate.

The scrolls include at least fragments of every book of the Old Testament except the book of Esther. The oldest existing copies of the Old Testament, they generally confirm the accuracy of later manuscripts. Other scrolls also give a new insight into the Jewish society in which Christianity began.

History of Qumran
Remains dating back to the Iron Age have been uncovered at Qumran as well as walls, pottery and a cistern from later settlements. Even all those years ago fresh water was an issue in this dry environment, and aqueduct systems were added to bring fresh water to the city from the greener regions of the north.

Qumran was established during the Hellenistic Period c.134-104BC and remained inhabited up until c.68BC, multi-level structures, reservoirs, pottery kilns and houses have been excavated in this era. It was during the Hellenistic Period that the Essenes Jewish sect settled here, isolating themselves from big city life and living as a communal monastery-like community. The sect is thought to have eaten communal meals, studied sacred scriptures for most of the night, taken a daily ritual bath, practice celibacy and they had their own calendar. From information found in the Dead Sea Scrolls scholars have managed to get a clear picture of the community’s way of life and beliefs. It is thought that about 200 people once lived here. In later periods of history there were Arab settlements here and during the Bar Kokhba Revolution the rebels may have taken refuge here.

The lowest place on earth, the Dead Sea (431m below sea level) brings together breathtaking natural beauty and compelling ancient history, like few places on earth. The jagged bluffs of the Judean Desert, cleft by dry canyons rise from the cobalt blue waters of the Dead Sea, so heavy with salt and oily with minerals that no fish can live in it. Located about 25km east of Jerusalem, along the border between Israel and Jordan, with half of it geographically located within Jordanian territory.

Known in the Bible as the “Salt Sea” or the “Sea of the Arabah,” The Dead Sea, unlike the Sea of Galilee to the north, does not figure prominently in the biblical narratives.  Its most important role was as a barrier, blocking traffic to Judah from the east.  An advancing army of Ammonites and Moabites apparently crossed a shallow part of the Dead Sea on their way to attack King Jehoshaphat (2 Chr 20).

Evaporation concentrates the minerals
Ezekiel prophesied that one day the Dead Sea will be fresh water and fishermen will spread their nets along the shore. The water levels of the Dead Sea are a constant issue, with it constantly being under threat of shrinking. Water level are dropping by more than a metre a year. Most of the water that once flowed from the Jordan River into the Dead Sea is now being diverted for drinking water and agricultural purposes, so there is not enough to offset the high evaporation rate. Rescue proposals to prevent the sea drying up have included canals to bring water from the Mediterranean Sea or the Red Sea.

If these plans are successful and the Dead Sea becomes rejuvenated with fresh water, this could fulfil a prophecy in Ezekiel 47:8-10, that it will “become fresh . . . and there will be very many fish”.

Health and Well-being
Today modern mineral spas, that soothe and pamper every fibre of your body are dotted along the shoreline. Although the Dead Sea’s mineral benefits are not a recent discovery, the Dead Sea’s therapeutic qualities attracted Herod the Great, with it’s minerals and sticky black mud providing balms for Egyptian mummies and cosmetics for Cleopatra. taste.