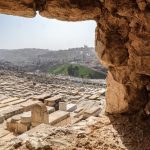 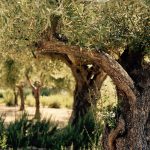 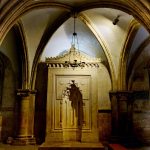 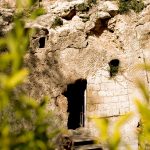 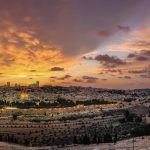 Jerusalem
Read More
Day 5
We will begin our time in Jerusalem at the Mount of Olives. Jesus will touch down here, when He returns, according to Zechariah 14. We will then walk down to the Garden of Gethsemane and visit the Upper Room. Then exploration of another kind, as you delight in the sights and smells of the Arabic and Jewish quarters in the Old City. The perfect opportunity to buy that unique Holy Land keepsake. We will end the day by taking communion together at the Garden Tomb.

Friday evening will commence with Ron and Elana Cantor, opening the Sabbath with traditional Jewish prayers. This will be followed by a special broadcast event in the hotel ballroom, with the GOD TV Team and guests from around Israel. Later that evening, you will have the chance to visit the Western Wall to observe and participate in the Sabbath prayers.
Overnight in Jerusalem
Mount of Olives
Read More
Mount of Olives

The Mount of Olives, one of three hills on a long ridge to the east of Jerusalem, is the location of many biblical events. Rising to more than 800 metres, it offers an unrivalled vista of the Old City and its environs.

The hill, also called Mount Olivet, takes its name from the fact that it was once covered with olive trees.

In the Old Testament, King David fled over the Mount of Olives to escape when his son Absalom rebelled (2 Samuel 15:30).

After King Solomon turned away from God, he built pagan temples there for the gods of his foreign wives (1 Kings 11:7-8).

Ezekiel had a vision of “the glory of the Lord” ascending from the city and stopping on the Mount of Olives (Ezekiel 11:23).

Zechariah prophesied that in the final victory of the forces of good over the forces of evil, the Lord of hosts would “stand on the Mount of Olives” and the mount would be “split in two from east to west” (Zechariah 14:3-4).

Jesus Knew it Well
In the New Testament, Jesus often travelled over the Mount of Olives on the 40-minute walk from the Temple to Bethany. He also went there to pray or to rest.

He went down the mount on his triumphal entry to Jerusalem on Palm Sunday, on the way weeping over the city’s future destruction (Luke 19:29-44).

In a major address to his disciples on the mount, he foretold his Second Coming (Matthew 24:27-31).

He prayed there with his disciples the night before he was arrested (Matthew 26:30-56). And he ascended into heaven from there (Acts 1:1-12).

King David flees over the Mount of Olives: 2 Samuel 15:30

After a night of feverish prayer, Jesus was arrested in this garden (Mark 14:26, 32–50), now attached to the Church of All Nations, the church itself built over the very rock on which Jesus is believed to have prayed in agony before he was betrayed by Judas Iscariot and arrested. The garden, about 1200 square metres in area, was well known to the disciples as it is close to the natural route from the Temple to the summit of the Mount of Olives and the ridge leading to Bethany.

The garden has some of the world’s oldest olive trees (in Hebrew gat shmanim means ‘oil press’), and although there is conjecture over the age of the trees, their gnarled branches give the garden a timeless character, suggesting that they could just be the same trees beneath which Jesus prayed whilst his disciples slept, bearing silent witness to the Agony of Jesus the night before he died?

Since at least the early 4th century AD, a site on Mount Zion, known as The Cenacle, which means "dining room", is popular place of pilgrimage. It is believed to be the site where Jesus celebrated the last supper with his disciples. The New Testament records that after Jesus ascended into heaven, the apostles gathered in the "Upper Room" to pray together (Acts 1:13). The culmination of their 9 day vigil was the outpouring of the Holy Spirit on the day of Pentecost.

Jesus' Last Supper with His Disciples
In Jesus' time, every male Jew, who was of age and lived within 15 miles of Jerusalem, was bound to celebrate Passover every year in Jerusalem.  This annual feast commemorated the deliverance of the people of Israel from their slavery in Egypt (see Exodus 12).  On that night the angel of death slew the first-born of the Egyptians; but he "passed over" the homes of the Israelites, because the lintel of their doors was smeared with the blood of an unblemished lamb sacrificed for the occasion.

Jesus chose the time of Passover to fulfil what he had announced at Capernaum – giving his disciples his body and his blood (John 6:51-58).  This is the most significant meal of Jesus and the most important occasion of his breaking of bread.  In this meal Jesus identifies the bread as his body and the cup as his blood. Christians have understood Jesus’ passing over to his Heavenly Father by his death and resurrection as the new Passover, which is anticipated in the Last Supper and celebrated in the Eucharist or Lord's Supper, which fulfils the Jewish Passover and anticipates the final Passover of the church in the glory of God’s kingdom.

According to one early Christian tradition, the “upper room” was in the home of Mary the mother of John Mark. He was the author of the Gospel of Mark (and presumably also the young man who fled naked, leaving behind his linen garment, to escape the authorities when Jesus was arrested in the garden at Gethsemane, an event he recorded in Mark 14:51).

This house was a meeting place for the followers of Jesus. It was inside the city walls of Jerusalem, in a quarter that was home to its most affluent residents.

It was also the house to which Peter went after an angel of the Lord released him from prison. Acts 12:12-16 says a maid named Rhoda was so overjoyed at recognising his voice that she left him knocking at the outer gate while she went to tell the gathered disciples.

Sprawling through the Christian and Muslim quarters of Jerusalem’s Old City is the Arab Souk (market). This market has been around since the Ottoman Era and today features a paradox of traditional items and kitschy souvenirs. Not only is this generally the cheapest place to purchase gifts, but it is also the home to some well-known delicious eateries. Haggling is expected here, so this is a chance to practice your negotiating skills.

Away from the din of Derekh Shchem (Nablus Rd), north of the Damascus Gate, is a peaceful patch of green. The Garden is a two acre oasis in the often hectic city of Jerusalem, providing  a tranquil environment for prayer and reflection.

The open stone tomb nestled in the garden is carved into a rock face, with skull-like erosion in a limestone cliff nearby. John’s Gospel (19:17) describes the place of crucifixion as “The Place of the Skull, which in Hebrew is called Golgotha”. The rock-hewn tomb nearby was found in 1867.

The Garden Tomb has an aura of calmness that encourages meditation and reflection, “Walk around the gravel paths between the simple flower beds and the shrubs, and under the dark pines,” writes biblical historian E. M. Blaiklock. “Go one by one or two by two into the tomb, and pray for what lies nearest to the heart. A service is not necessary. It is a place in which you should meet with God alone, quietly, without distracting words, in tranquility.”

Jerusalem is a city in the Middle East, located on a plateau in the Judaean Mountains between the Mediterranean and the Dead Sea. It is one of the oldest cities in the world, and is considered holy to the three major Abrahamic religions—Judaism, Christianity, and Islam.