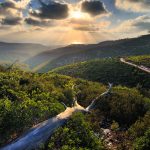 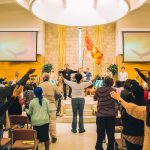 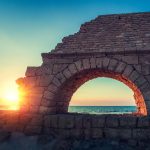 Caesarea
Read More
Day 4
We start by heading to Mount Carmel, where Elijah called down fire from Heaven. We will then visit the wonderful congregation of Messianic believers at Keren Davis Kehilat Carmel for a time of praise and worship within their community. Next, we will enter the ancient city of Caesarea. This was once an artificial port built by King Herod the Great that extended far into the Mediterranean Sea. Then get ready, it’s now time to head to the Holy City, Jerusalem. We will conclude our day with a visit to the Jerusalem Overlook where you can enjoy panoramic views across the Old City of Jerusalem.
Overnight in Jerusalem
Mount Carmel
Read More
Mount Carmel

Stretching south-east from the Mediterranean Sea, with the city of Haifa sloped against it, Mount Carmel is actually a coastal range rather than a mountain.

From ancient times it was considered a sacred place. It is often cited in the Old Testament for its beauty and fertility.

The prophet Elijah’s fire-lighting challenge — one of the Old Testament’s most spectacular contests between Yahweh, the God of the Israelites, and a pagan deity — took place on the south-eastern summit of Mount Carmel.

Elijah’s challenge came during a period after successive kings “did evil in the sight of the Lord” (1 Kings 16:30).

King Ahab had married the Phoenician princess Jezebel. She turned his allegiance from Yahweh to her god Baal and had Yahweh’s prophets slaughtered.

So Elijah called on Ahab to assemble the 450 priests of Baal on Mount Carmel. There he challenged the priests to call on fire from Baal to light a sacrifice.

As the book of 1 Kings relates, Baal failed to respond to the priests’ cries. Then Elijah rebuilt the ruined altar of the Lord and offered a sacrifice. Immediately fire from heaven consumed the offering, even though it had been soaked in water.

The God of Abraham, Isaac, and Jacob called the people of Israel back to the land of their inheritance. Emerging in the midst of the re-gathered nation of Israel is a remnant of believers in Yeshua, the Messiah. Kehilat HaCarmel is a community of Messianic believers located on Mt. Carmel in the city of Haifa.

Kehilat HaCarmel (Carmel Congregation) began in 1991 in the midst of the great wave of Russian-speaking Jews returning to their ancient homeland, and at the end of the Gulf War, after the Iraqi dictator Saddam Hussein’s missiles had bombarded the port of Haifa at the foot of Mount Carmel.

The congregation was birthed in downtown Haifa in a Bible study at Beit Nitzachon (House of Victory), a men’s rehabilitation centre for Jews and Arabs, founded by David and Karen Davis.

The Davis’ were joined by Peter Tsukahira in leading the fledgling congregation and the meetings were moved to the top of Mount Carmel in rented space in a retreat centre, formerly called “Stella Carmel”.

Within a few years as their numbers grew and the need for a larger, permanent meeting place became apparent, a piece of unused land at the back of the Stella Carmel property was then offered to the congregation. More than 500 volunteers from over 50 nations came to participate in the building of the new Kehilat HaCarmel worship centre which was completed in 1998. Based on 1 Kings 18, where the prophet Elijah “repaired the altar of the Lord that was broken down” the design of the sanctuary has an altar with 12 stones, representing the re-unified tribes of Israel and Judah, today the re-gathered nation of Israel, and a skylight above the altar, symbolising an open heaven for the fire of the Lord to fall once again on Mount Carmel.

Time-worn ruins are strewn along the crystalline Mediterranean shore of Caesarea (Qeysarya; pronounced 'kay-sar-ee-ya' in Hebrew).

Caesarea — not to be confused with Caesarea Philippi in Galilee – was founded by Herod the Great on the site of an ancient fortified town. In 22 BC, with no expense spared, he began building a new city and harbour.Massive breakwaters gave safe anchorage to 300 ships, a sewage system was flushed by the tide, and a vast hippodrome seated more than 20,000 people at chariot races. Later an amphitheatre was built to present chariot races, gladiatorial combats, animal performances and theatrical events. Little wonder that Caesarea has been dubbed “Vegas on the Med.”

Today’s visitors can see a restored Roman theatre built to accommodate 4000 and a Roman aqueduct that brought water from the foothills of Mount Carmel.

Just inside the theatre is a replica of an inscription carved in stone, bearing the name of Pontius Pilate.

The remains of a Crusader walled city, from the 13th century, include a cathedral which was never completed because the vaults below, from an earlier period, were unable to bear the weight.

In the attractive Mediterranean seaport of Caesarea Maritima, the apostle Peter baptised the first recorded gentile convert to Christianity — Cornelius, a centurion in the Roman army. When this Italian soldier and his household believed in Jesus they received the gift of the Holy Spirit and began speaking in tongues. This event astonished the Jewish Christians but validated the fact that salvation was for all people (Acts 10).

Caesarea Maritima (“by the sea”) was the scene of other significant events for Christians: