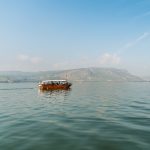 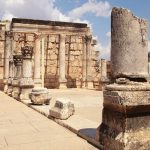 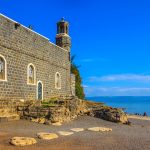 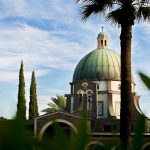 Mt of Beatitudes
Read More
Day 2
We begin our day with devotions, as we sail on the Sea of Galilee. Where we will share a magnificent time of worship together as a family. Next, we’ll enter Kfar Nachum, also known as Capernaum – Yeshua’s headquarters. The Bible calls it Jesus’ “own city”. Matthew 4:13 tells us that Jesus left Nazareth and went to live in Capernaum after being tempted in the wilderness. Here Jesus met James, John, Peter, Andrew all fishermen and Matthew a tax collector, five of his future disciples. We’ll stop for lunch at St. Peter’s Restaurant, where you will sample their famous speciality, St Peter’s Fish.

At Tabgha, we’ll visit the beach, where in Mark 6:30-46, we are told of the Miracle of the Multiplication of the Loaves and Fishes took place. Later you’ll see the Mount of Beatitudes, the site where Jesus delivered the famous Sermon on the Mount.
Overnight in Tiberias
Sea of Galilee
Read More
Sea of Galilee

The Sea of Galilee has changed comparatively little since Jesus walked on its shores and recruited four fishermen as his first disciples.

A picturesque, heart-shaped lake set among hills in northern Israel, it is one of the lowest-lying bodies of water on earth (some 210 metres below sea level).

This freshwater “sea” is 21km long and 13km across at its widest point, with a maximum depth of 43 metres. Its other names include the Sea of Tiberias, the Lake of Gennesaret and (in Hebrew) Lake Chinnereth or Kinneret.

The Jordan River flows into the Sea of Galilee near the ruins of the ancient city of Bethsaida, providing three-quarters of the lake's annual intake. It exits the lake, on its way to the Dead Sea, next to the Yardenit baptism site, at the lake’s far southern tip.

In modern times tourism has become the major local industry. In Jesus’ time it was fishing, with 230 boats regularly working the lake and their catch dried and exported all over the Roman world.

Jesus made the fishing town of Capernaum the centre of his itinerant ministry in Galilee, using the lake, its boats and its shores to spread his Good News. He calmed a storm, he walked on the water and probably even swam in the lake.

Miracles on the Shore
It was around the usually serene waters of the Sea of Galilee that Jesus began his public ministry, teaching in the synagogues and curing the sick. Crowds flocked to him, “for he taught as one having authority, and not as their scribes” (Matthew 7:29).

Perhaps his best-known discourse, the Sermon on the Mount, is believed to have been delivered on the Mount of Beatitudes (also known as Mount Eremos). This small hill is on the lake’s northwestern shore, between Capernaum and Tabgha.

Tabgha is also the traditional site where Jesus fed a crowd of 5000 with five loaves and two fish. Later, across the lake near Kursi, he performed a second miraculous feeding.

The Heptapegon (“Seven Springs”) fishing ground off Tabgha was also the scene of a memorable post-Resurrection appearance.

The apostles had fished all night with empty nets. Just after daybreak Jesus appeared and told them where to find a miraculous catch. When the apostles came ashore, they found the risen Lord had cooked breakfast for them.

Archaeological Site in Northwestern Shore
The New Testament says that the prosperous lakeside village of Capernaum (estimated population 1500), on the imperial highway from Tiberias to Damascus, was Jesus’s base during the most influential period of his Galilean ministry (Matthew 4:13, Mark 2:1, John 6:59). It is mentioned by name 16 times: this is where Jesus is believed to have preached at the synagogue (Mark 1:21), healed the sick and recruited his first disciples, fishers Peter, Andrew, James and John and Matthew the tax collector.

Capernaum’s renowned synagogue, whose facade faces south towards Jerusalem, consists of two superimposed structures. The reconstructed building that can be seen today, known as the ‘White Synagogue’ because it’s made of light-coloured limestone, was built in the late 4th century atop the dark basalt foundations of the ‘Synagogue of Jesus’. Excavations show that one room in this interlinked complex had been singled out since the middle of the 1st century. Graffiti scratched on its plaster walls referred to Jesus as Lord and Christ (in Greek). It is suggested that this room was venerated for religious gatherings as a house church. If so, it would have been the first such example in the Christian world.

On the other side of the tree-shaded benches from the synagogue, 10m to the right of the olive press, a menorah decorates the upper lip of a column. A nearby column bears a 5th-century inscription in Hebrew commemorating a donation made by someone named Alpheus, son of Zebidah.

A modern, glass-walled church (1991; now air-conditioned), used for frequent Masses in dozens of languages (ask the officiating priest if you'd like to join), is dramatically suspended over the ruins of an octagonal, 5th-century church that partly obscures St Peter’s House, where Jesus is believed to have stayed.

Near the entrance to the site, there's a row of impressive stone lintels decorated with fruit and plant motifs but, in accordance with the Third Commandment (Exodus 20:4), no images of people or animals.

Tranquil Tabgha, on the north-western shore of the Sea of Galilee, is best known for Christ’s miraculous multiplication of loaves and fish to feed a multitude.

But it is also remembered for Jesus’ third appearance to his disciples after his Resurrection, when he tested and commissioned St Peter as leader of his Church.

Two churches commemorate these events, and pilgrims find the place a serene location for meditation, prayer and study.

Tabgha is at the foot of the Mount of Beatitudes, about 3km south-west of Capernaum. The name is an Arab mispronunciation of the Greek Heptapegon (meaning “seven springs”). Several warm sulphurous springs enter the lake here, attracting fish especially in winter.

This was a favourite spot for fishermen from nearby Capernaum, and its beach was familiar to Jesus and his disciples. It is easy to imagine Jesus speaking from a boat in one of the little bays, with crowds sitting around on the shore.

The modern Church of the Multiplication of the Loaves and Fishes at Tabgha stands on the site of a 4th-century church, displaying Byzantine mosaic decorations that are among the most elegantly executed in the Holy Land.

The whole floor depicts flora and fauna of the area in vibrant colours — peacocks, cranes, cormorants, herons, doves, geese, ducks, a flamingo and a swan, as well as snakes, lotus flowers and oleanders.

But the best-known mosaic, on the floor near the altar, refers to the miracle the church commemorates. It shows a basket of loaves flanked by two Galilee mullet.

Beneath the altar is the rock on which it is believed Jesus placed the loaves and fish when he blessed them.

Jesus Cooked Breakfast
Nearby, on the Tabgha beach, stands the Church of the Primacy of St Peter. This squat building of black basalt, built in 1934, is where Jesus is believed to have made his third appearance to his disciples after his Resurrection.

As the event is described in the 21st chapter of St John, Peter and six other disciples had been fishing all night without catching anything. Just after daybreak Jesus stood on the beach, though they did not recognise him.

Jesus told the disciples to cast their net on the right side of the boat and the net filled with 153 fish. When the disciples dragged the net ashore, they found that Jesus had cooked them breakfast on a charcoal fire.

The rock incorporated in the church floor is traditionally believed to be the place where Jesus prepared breakfast. It was known to medieval pilgrims as Mensa Christ (the table of Christ).

Peter was Challenged Three Times
After breakfast, Jesus challenged Peter three times with the question: “Do you love me?” Peter’s positive response to this three-fold challenge cancelled out his three-fold denial of Jesus the night before his crucifixion.

Then Jesus gave Peter a three-fold commission: “Feed my lambs . . . . Tend my sheep . . . Feed my sheep.” And he also indicated that Peter would die by martyrdom.

After this event Peter’s primacy as head of the apostles was recognised.

Beside the church, in a garden setting, is an area designed for group worship. Between this and the lake stands a modern bronze statue of Jesus symbolically commissioning Peter with his shepherd’s crook.

Since at least the 4th century, this landscaped hillside is believed to be where Jesus delivered his Sermon on the Mount (Matthew 5–7), whose opening lines – the eight Beatitudes – begin with the phrase ‘Blessed are…’. The sermon also includes the Lord’s Prayer and oft-quoted phrases such as ‘salt of the earth’, ‘light of the world’ and ‘judge not, lest ye be judged’.

The Mount of Beatitudes  is one of the most beautifully serene places in the Holy Land. Overlooking the northwestern shore of the Sea of Galilee, it offers an enchanting vista of the northern part of the lake and across to the cliffs of the Golan Heights on the other side. Within sight are the scenes of many of the events of Jesus’ ministry in Galilee, including the town of Capernaum 3km away, where he made his home. Just below is Sower’s Cove, where it is believed Jesus taught the Parable of the Sower (Mark 4:1-9) from a boat moored in the bay.

The Mount of Beatitudes is also understood to be the place where Jesus met his apostles after his Resurrection and commissioned them to “make disciples of all nations” (Matthew 28:16-20).

Eight Sides for Eight Beatitudes
The Church of the Beatitudes, an elegant octagonal building with colonnaded cloisters, blends into the slope rather than dominating it. The eight sides of the light and airy church represent the eight beatitudes, and these are also shown in Latin in the upper windows. The centrally placed altar is surmounted by a slender arch of alabaster and onyx. Around it, the seven virtues (justice, charity, prudence, faith, fortitude, hope and temperance) are depicted by symbols in the mosaic floor.